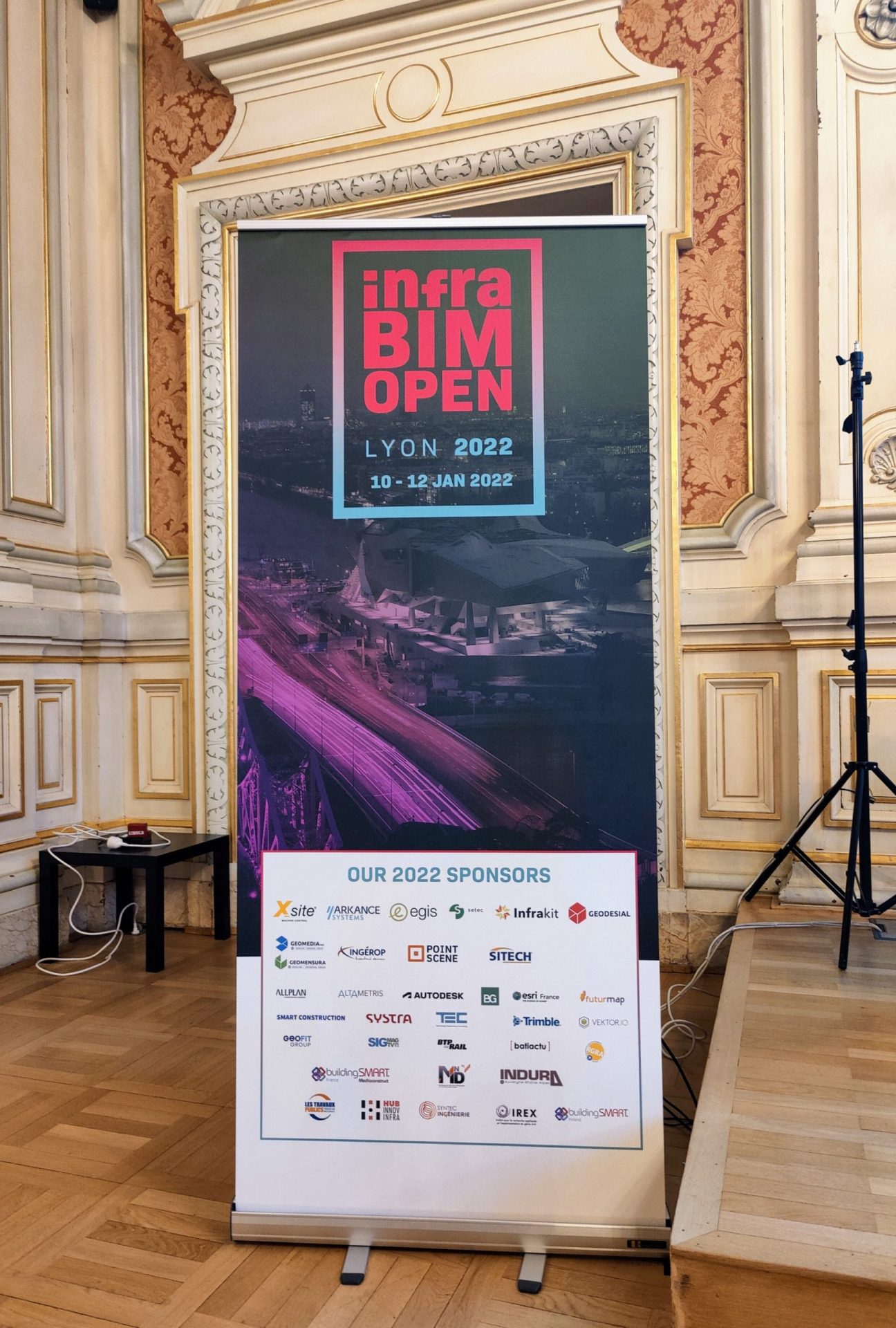 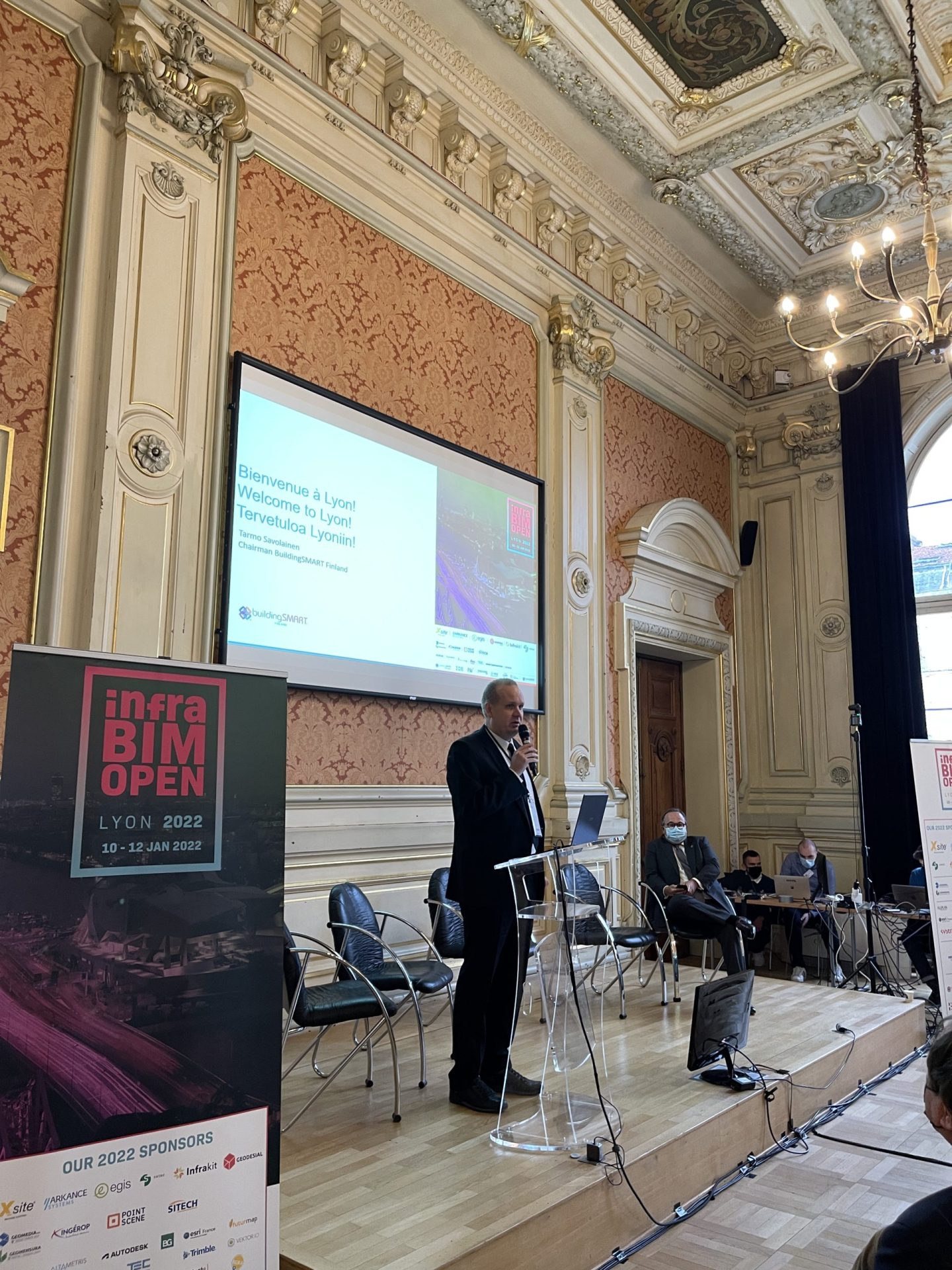 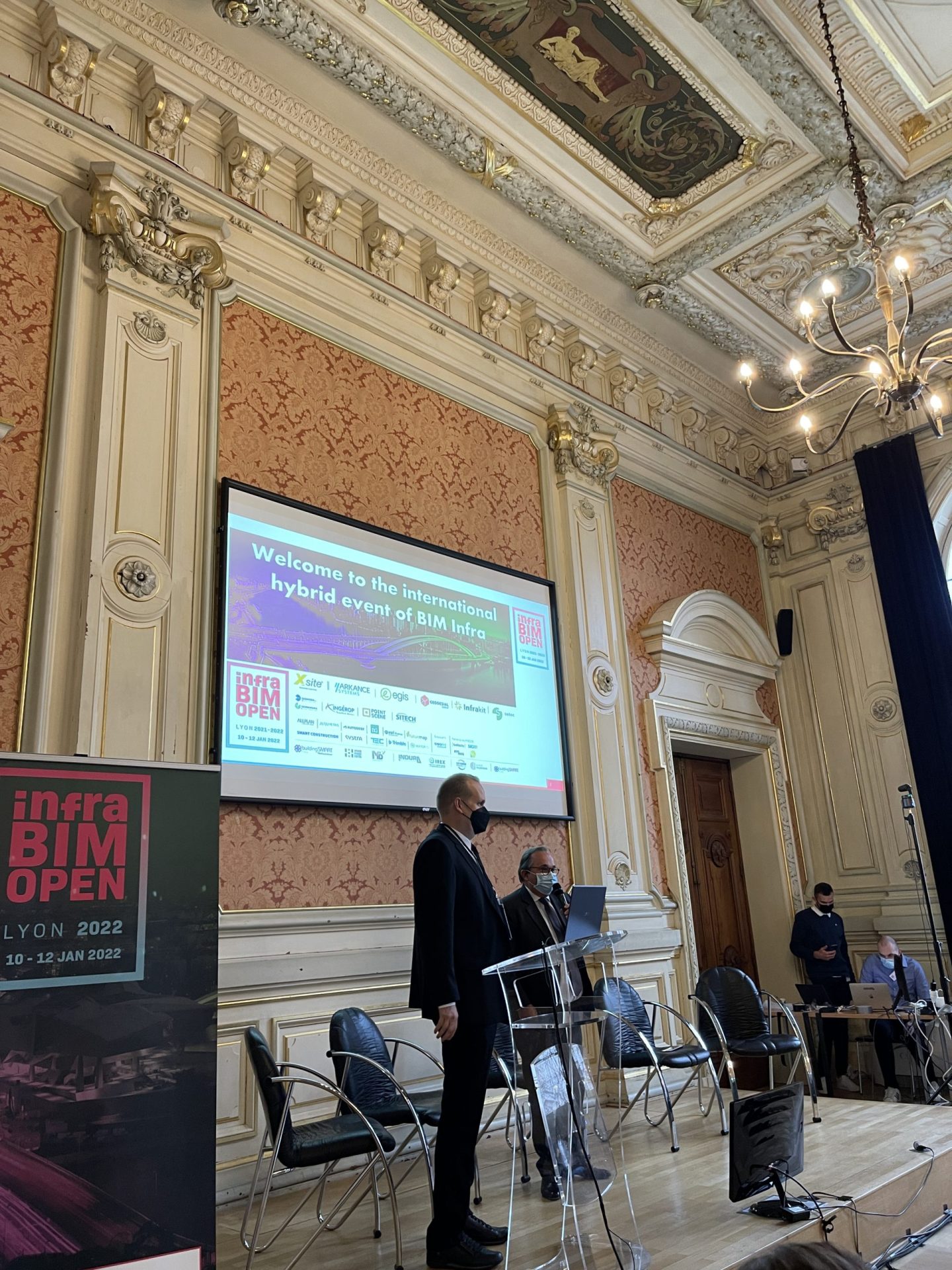 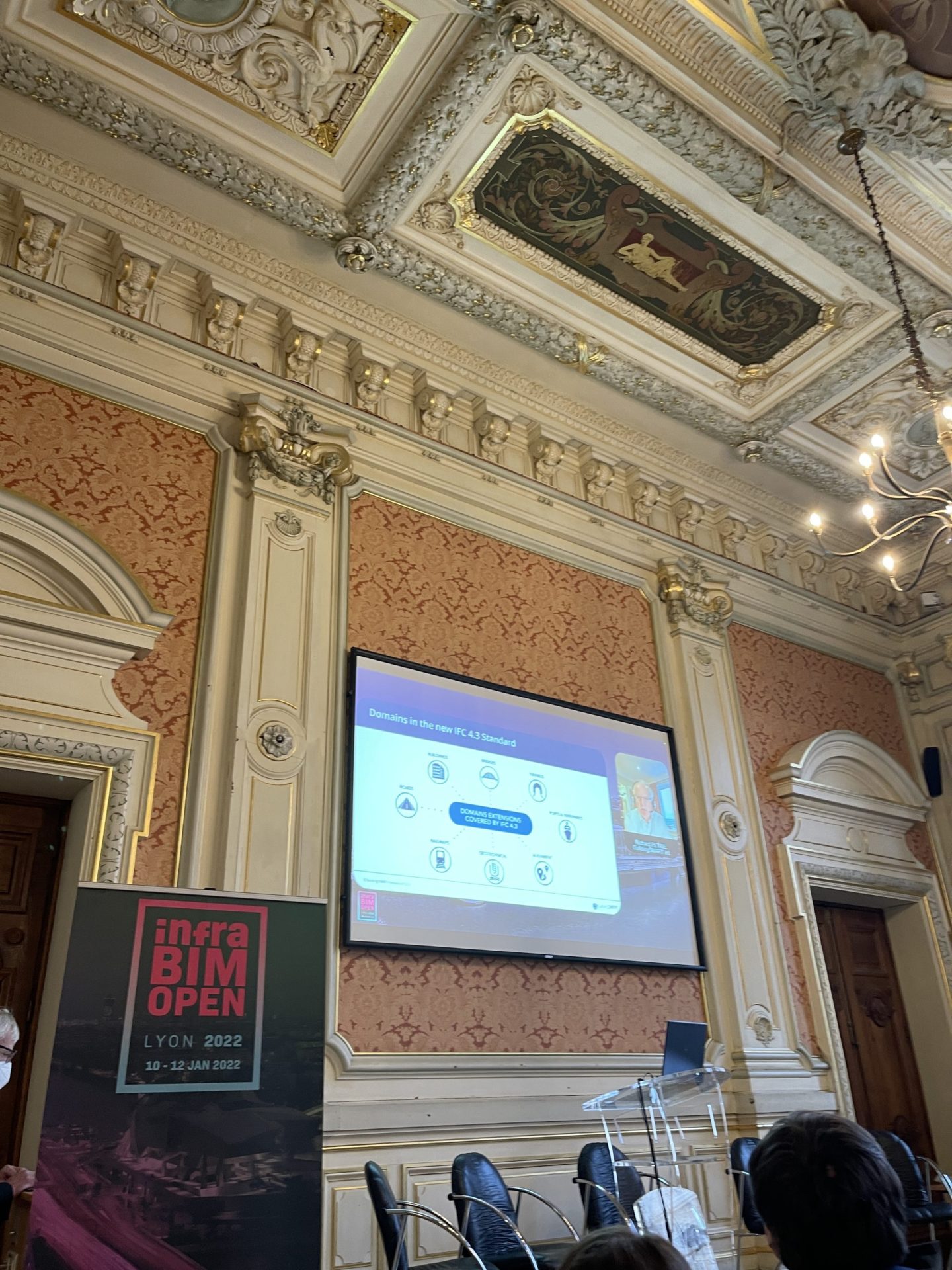 Richard Petrie (buildingSMART International) talking about the domain of the IFC 4.3. 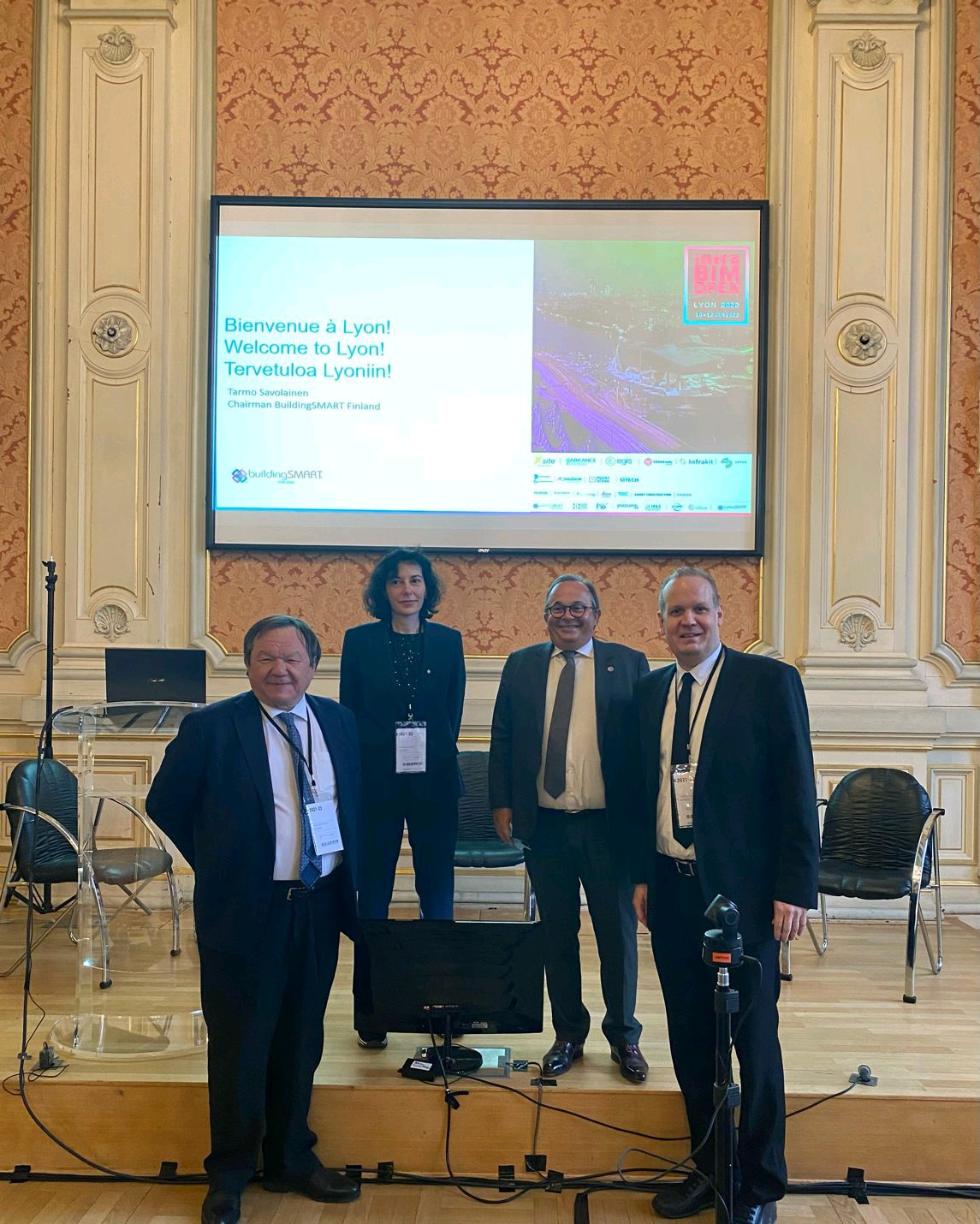 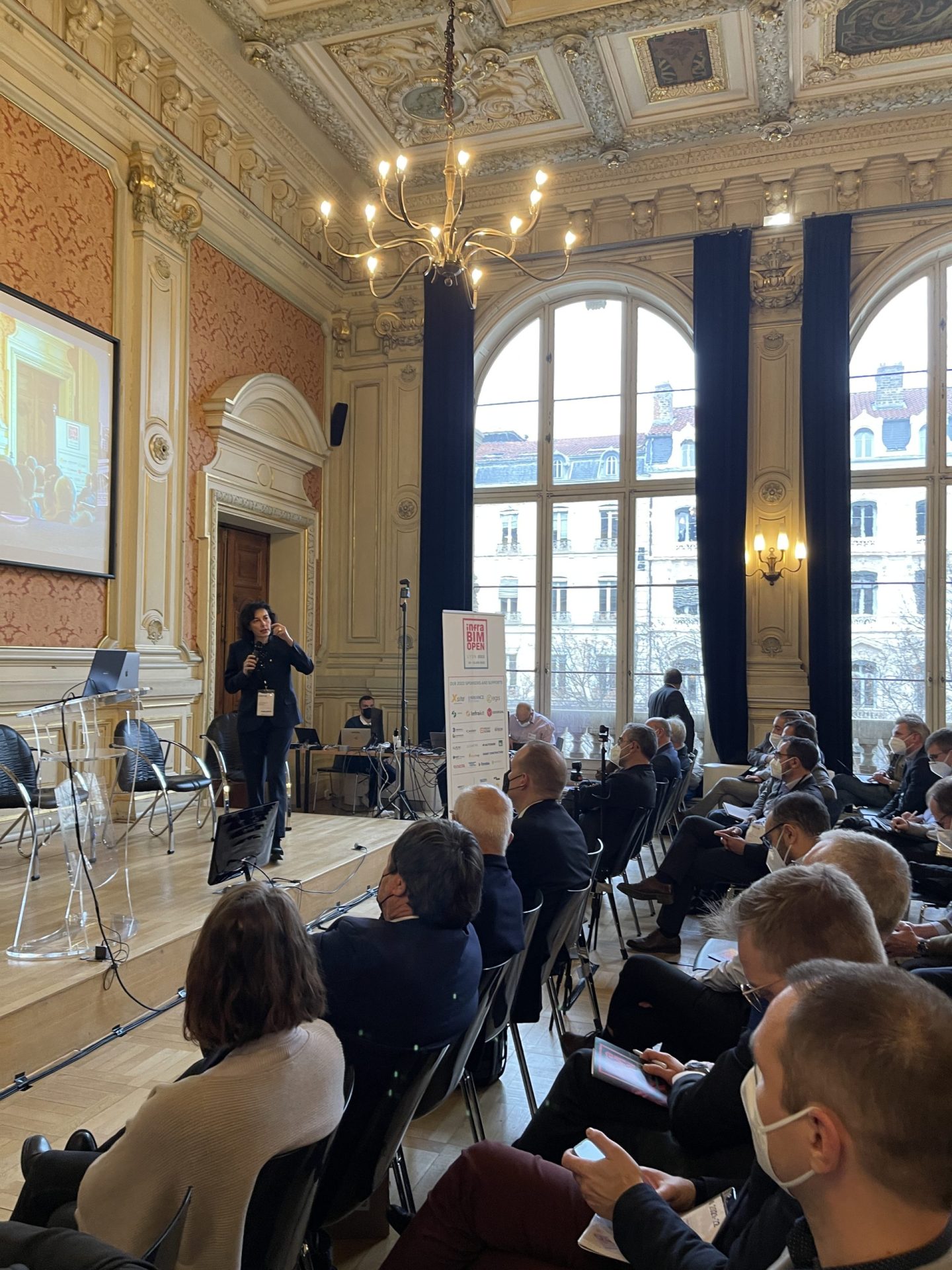 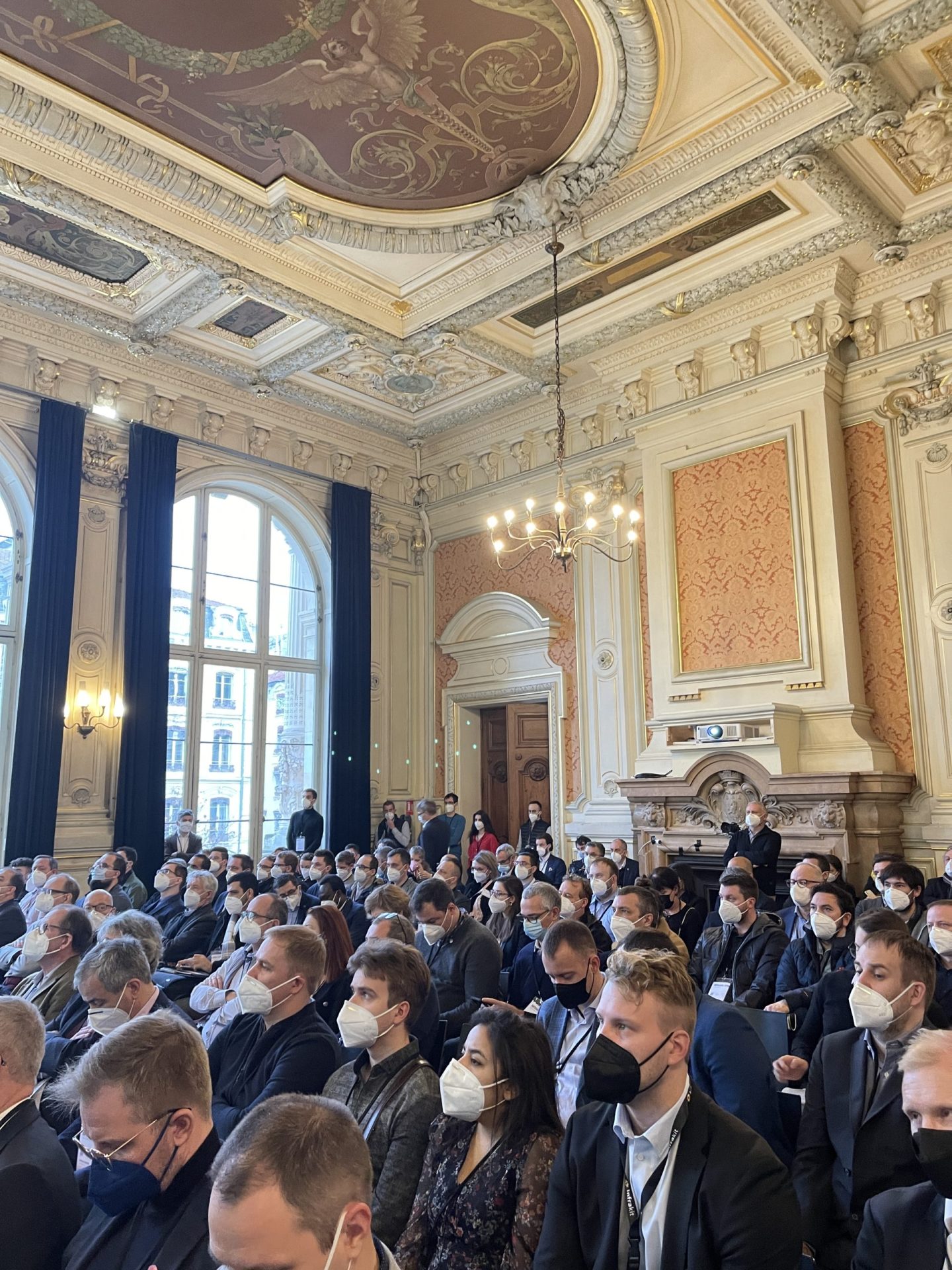 The house was full at the Opening Plenary!

Ville Alajoki from Finland talking about the Crown Bridge project in Helsinki as a part of the Round Table at the Openin Plenary. Map shown here is made by our current CEO Annina. 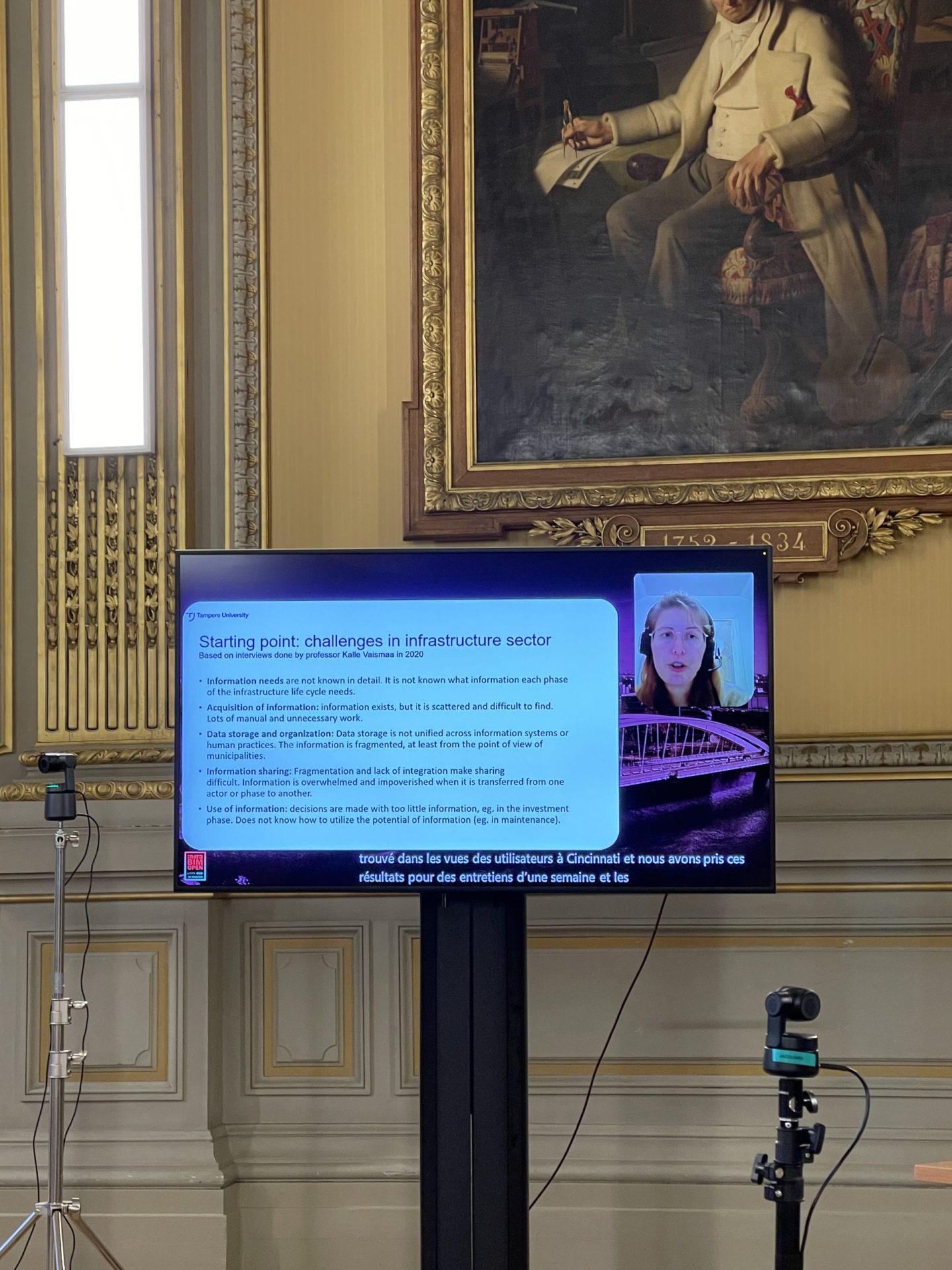 Some of the presentations were via remote access. Viivi Siuko from Tampere University, Finland, had a very inspiring presentation about challenges in the infrastructure sector. 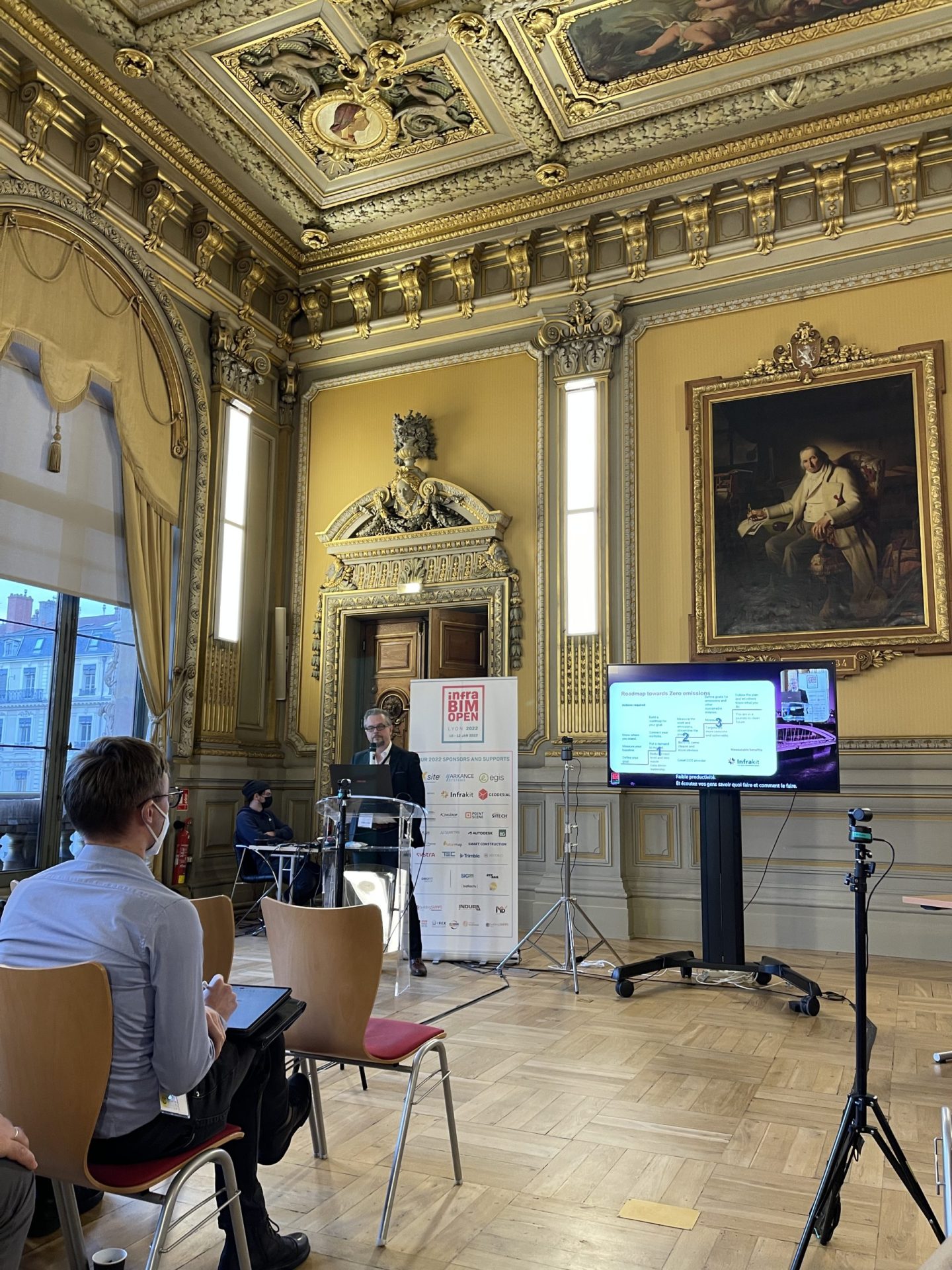 Pasi Joensuu from Finland talking about roadmap to zero emissions. 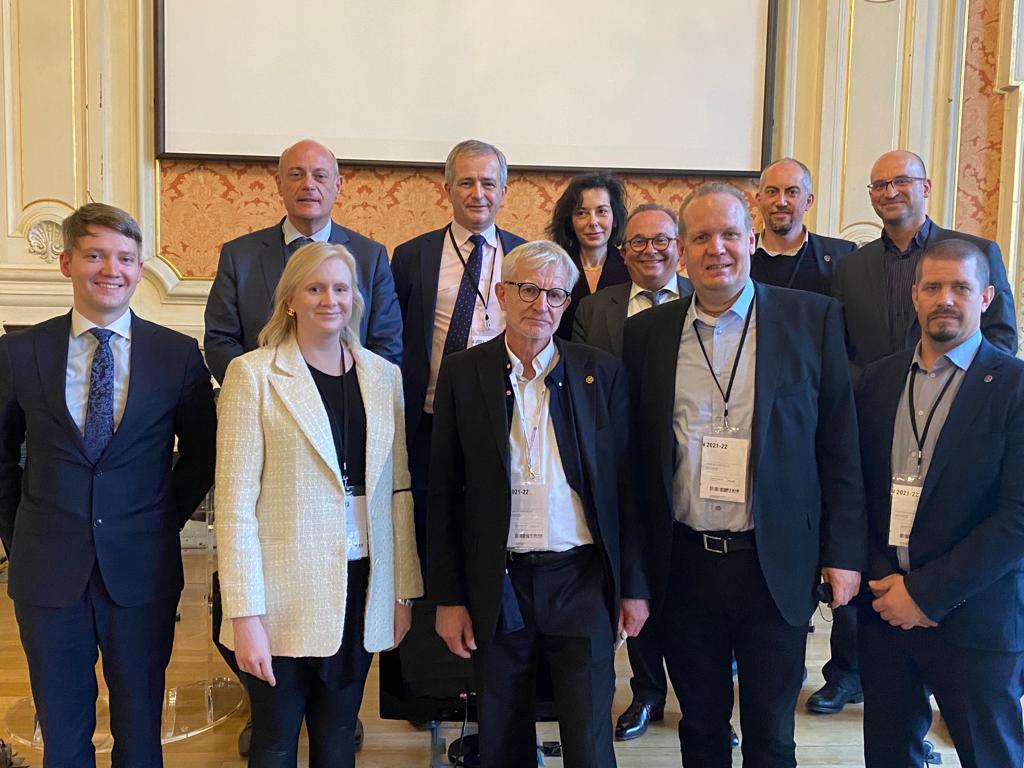 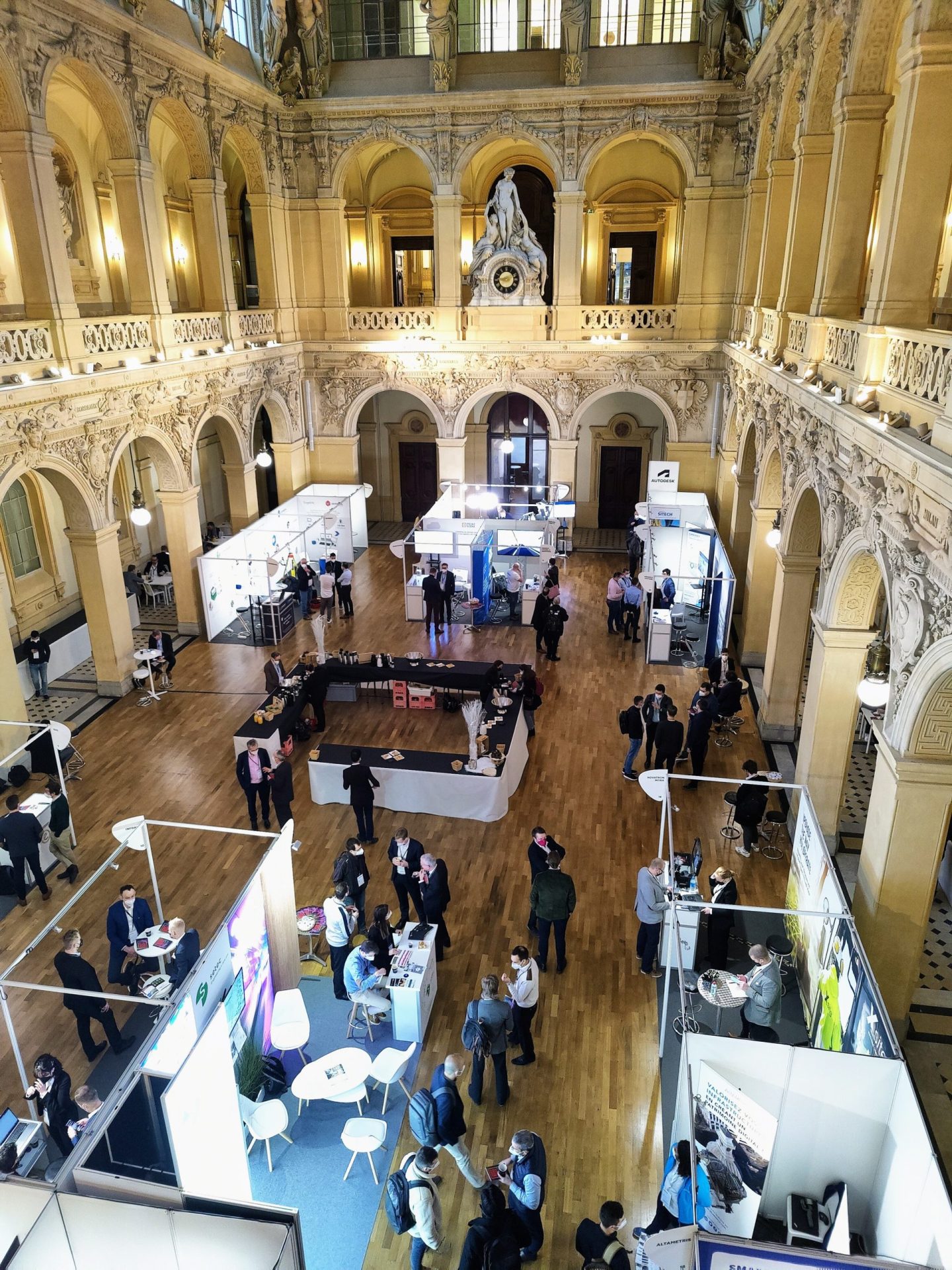 The athmosphere at the event was very inspiring! There was also time to network and chat with other participants at the event. 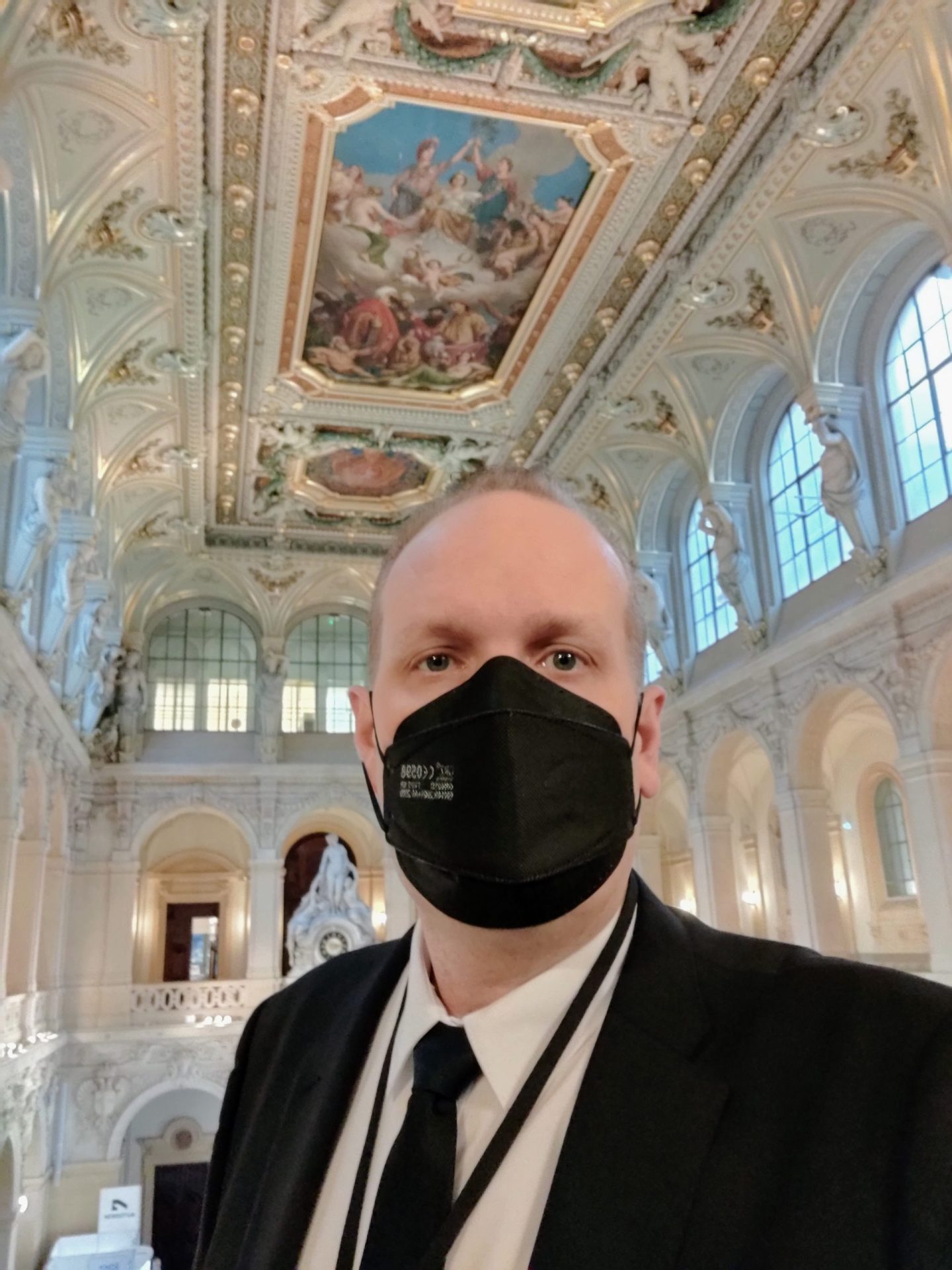 Tarmo Savolainen's selfie in the hall. As you can see, safety measures were taken care of during the event.

Lyon is a historical city and at least the Finnish delegation strolled around there after the first conference day! 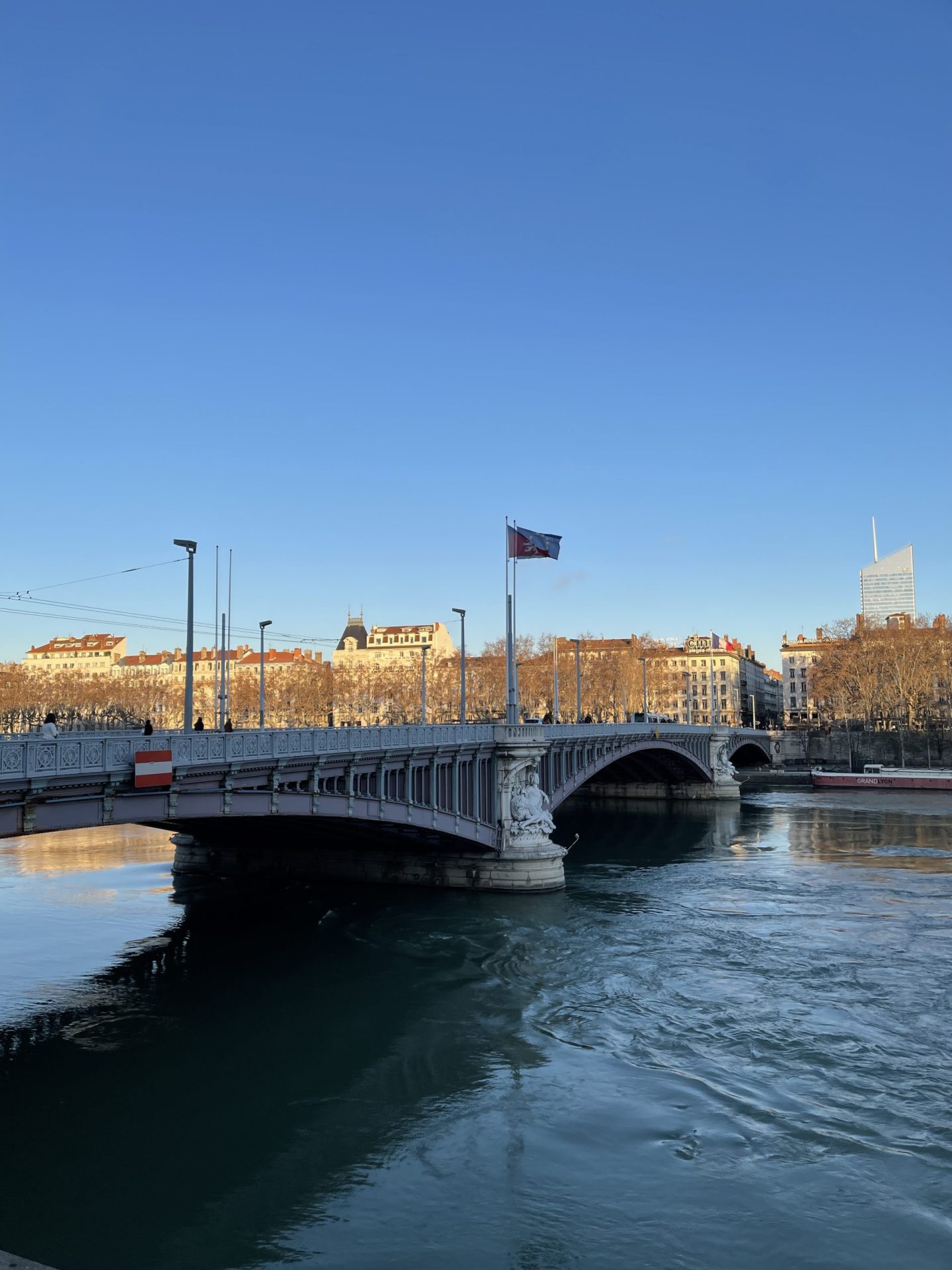 There was some time among the conference to get to know Lyon. The bridge in this picture is called Pont Lafayette and it crosses river Rhone. It has been constructed in 1820s and it is 214 meters long and 13 meters wide. 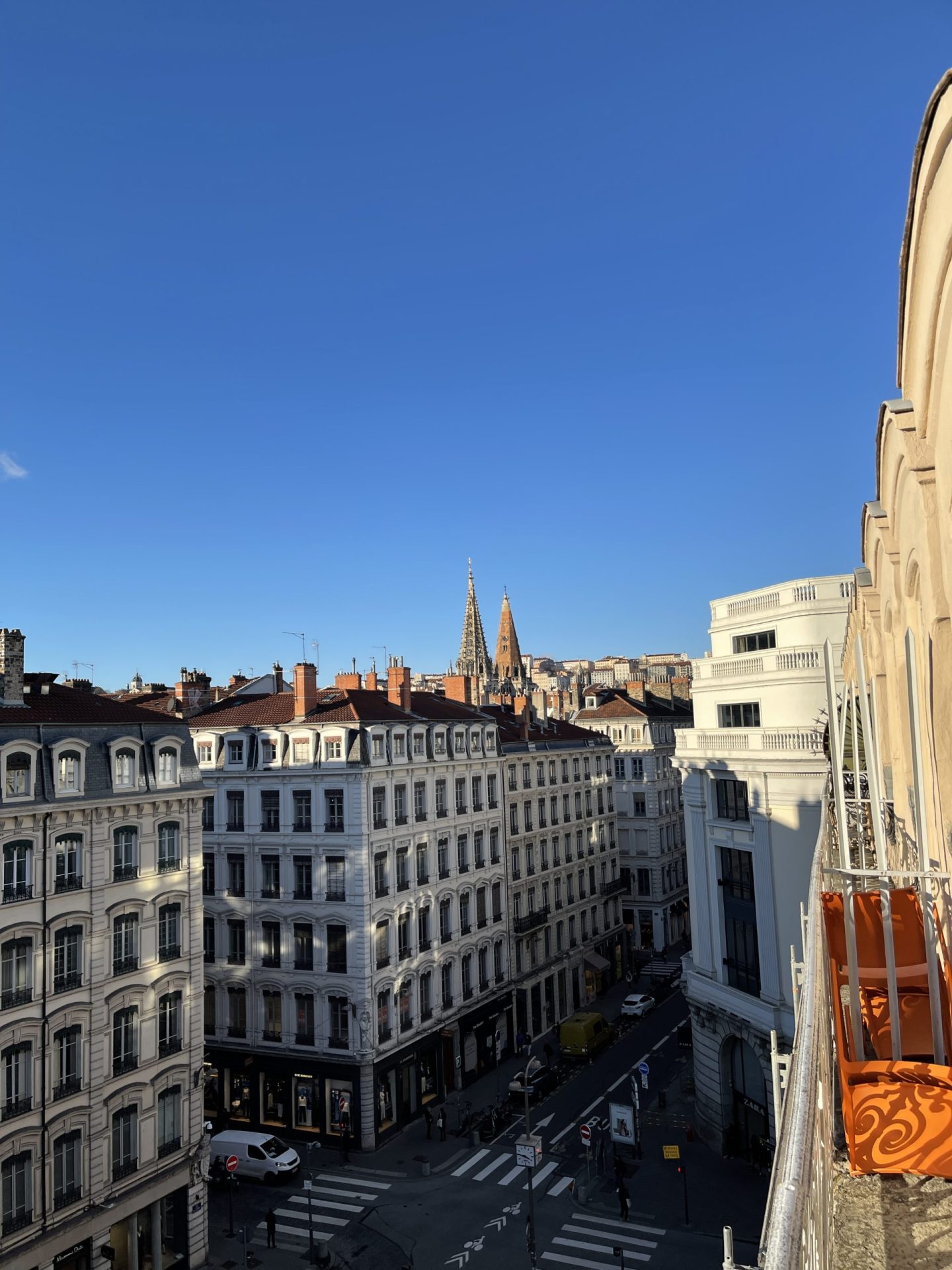 Views from the hotel most of the Finnish delegation stayed! In the background you can see the towers of the Church of Saint-Nizier. The construction of the church began already in the 14th century, but e.g. the sacristy and the organ were installed as late as in the 19th century. The church is part of UNESCO World Heritage List since 1998. 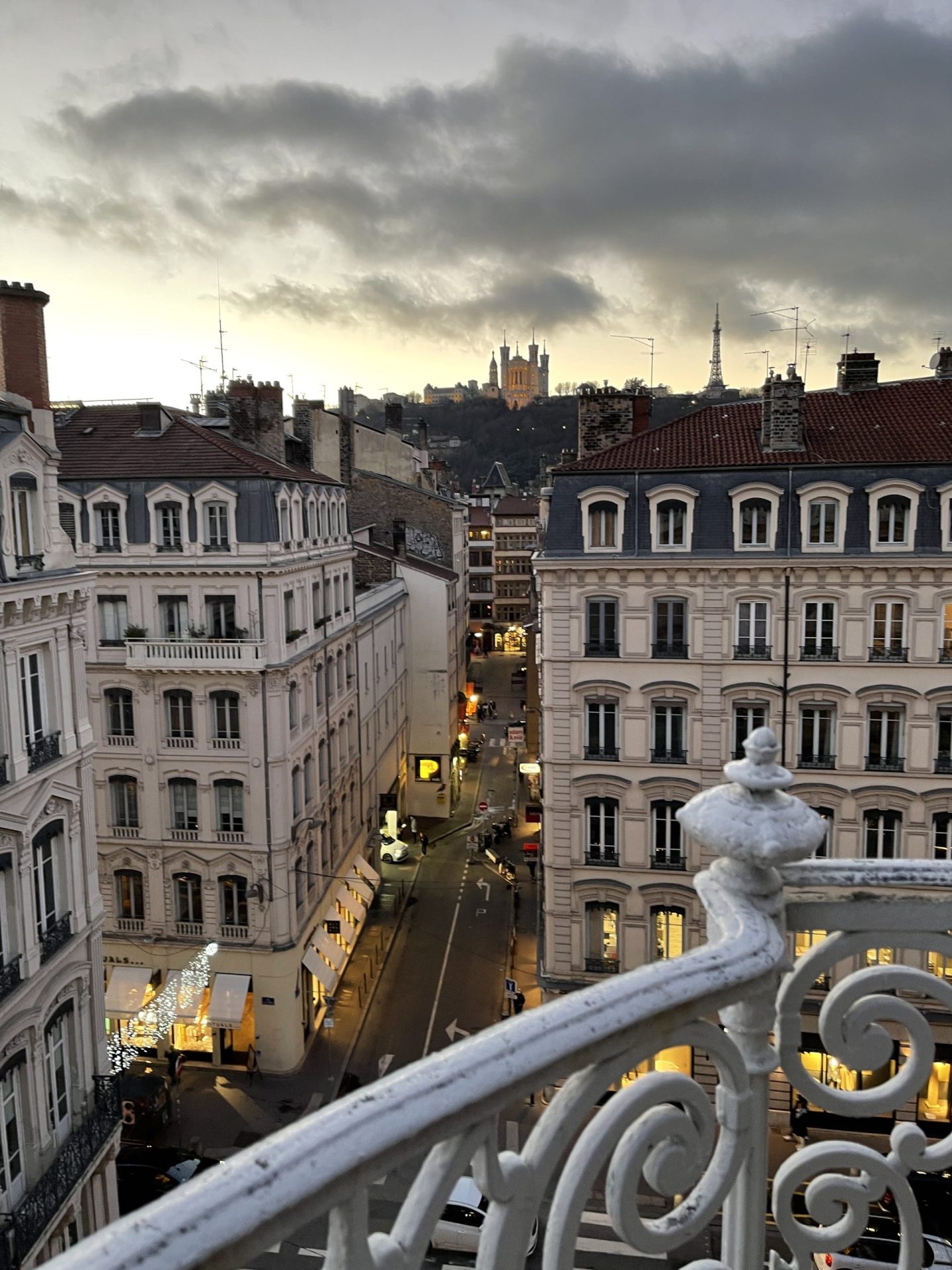 This is also view from the hotel. In the background you can see the Basilica of Notre-Dame de Fouvière. The construction was finished late 1890s. 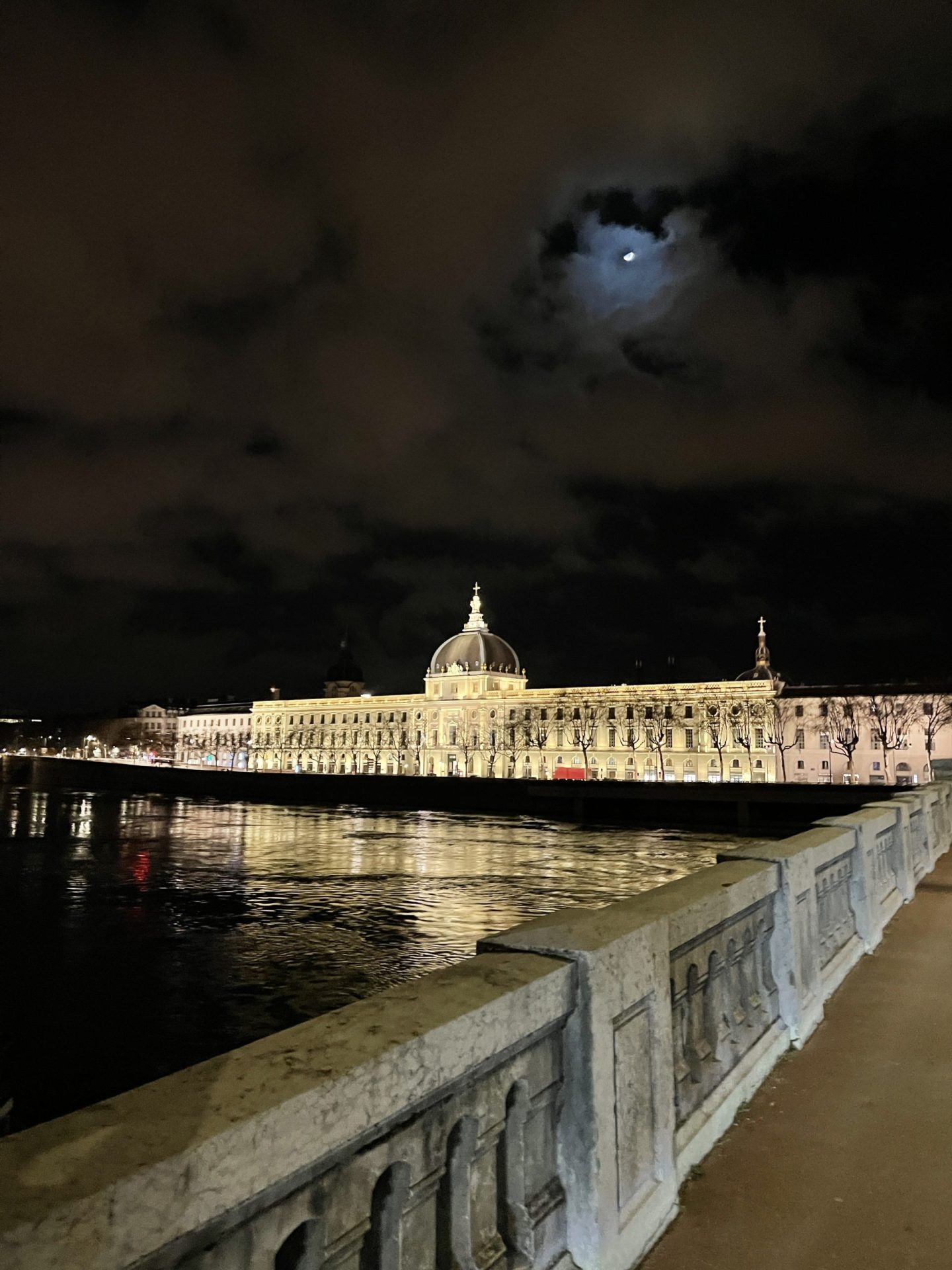 Hôtel-Dieu de Lyon lit during the night-time. The building was opened in 1454 and has a long history of serving as a hospital, refuge, museum and a hotel. 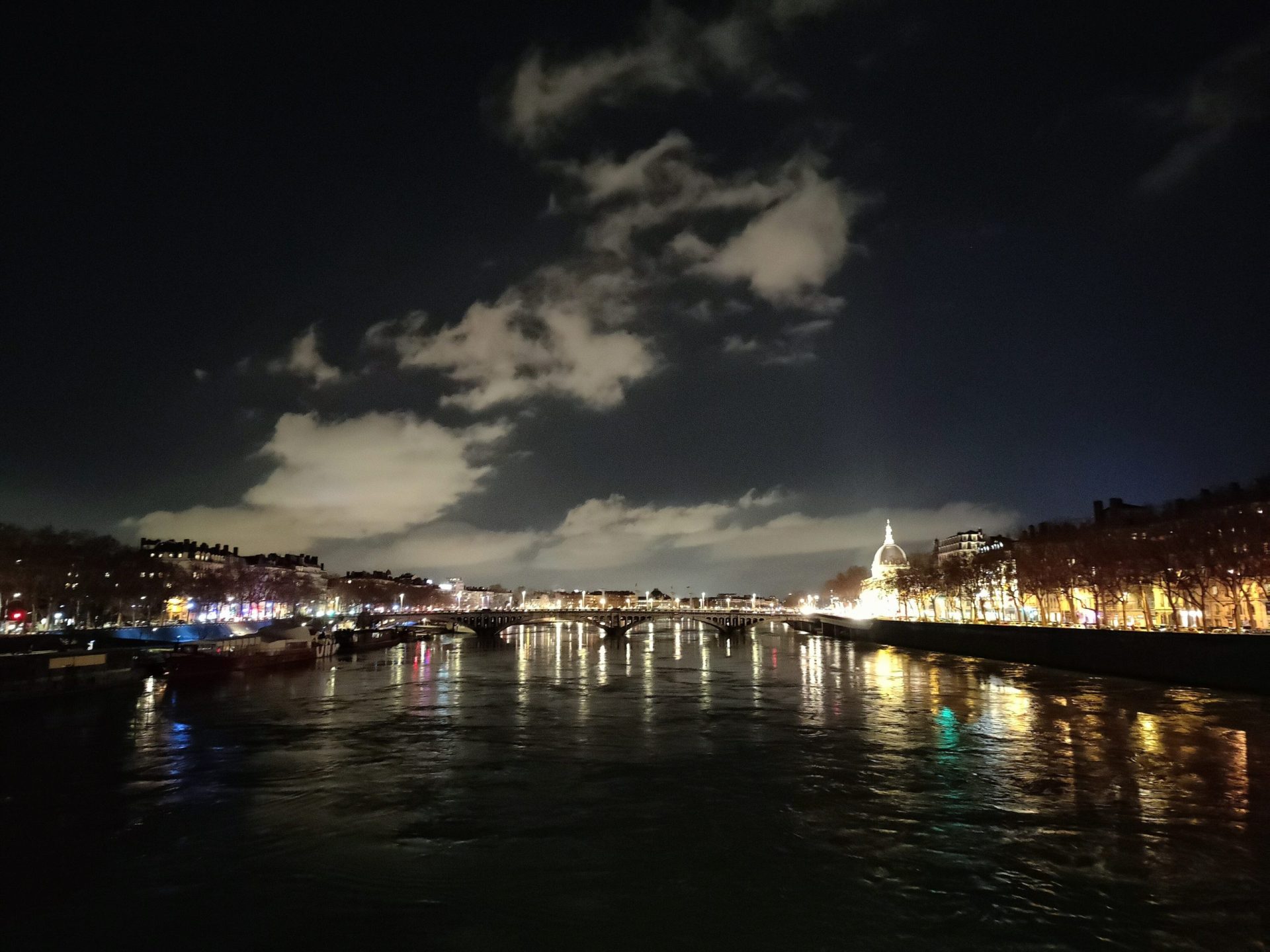 The lit river bank of Rhone. The bridge ahead is the Pont Wilson's bridge. 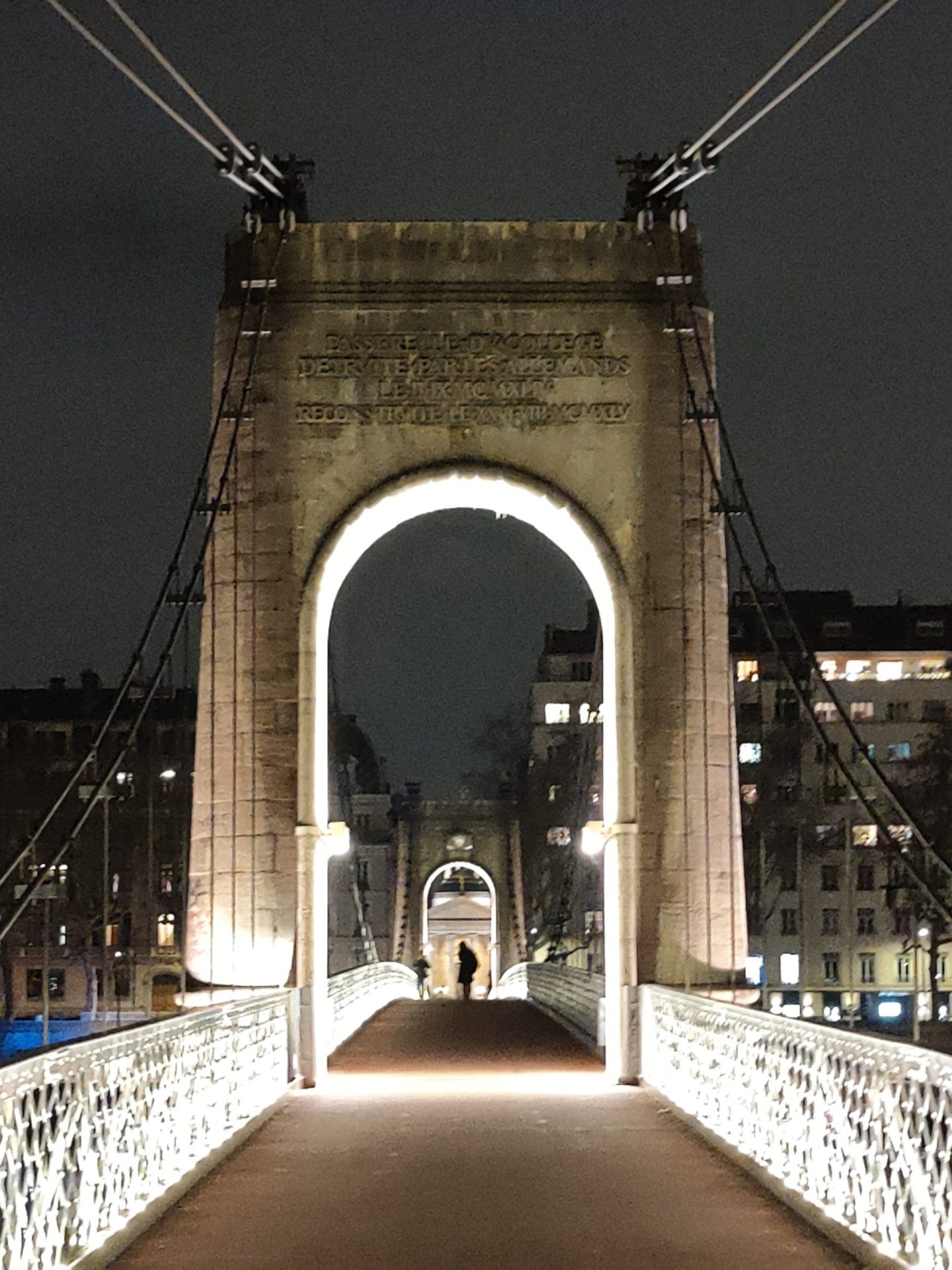 The Passerelle du College bridge during night-time. The construction of the bridge was completed in 1845 and it was rebuilt exactly one hundered years later in 1945 after one of the piers was destroyed in the World Was II. 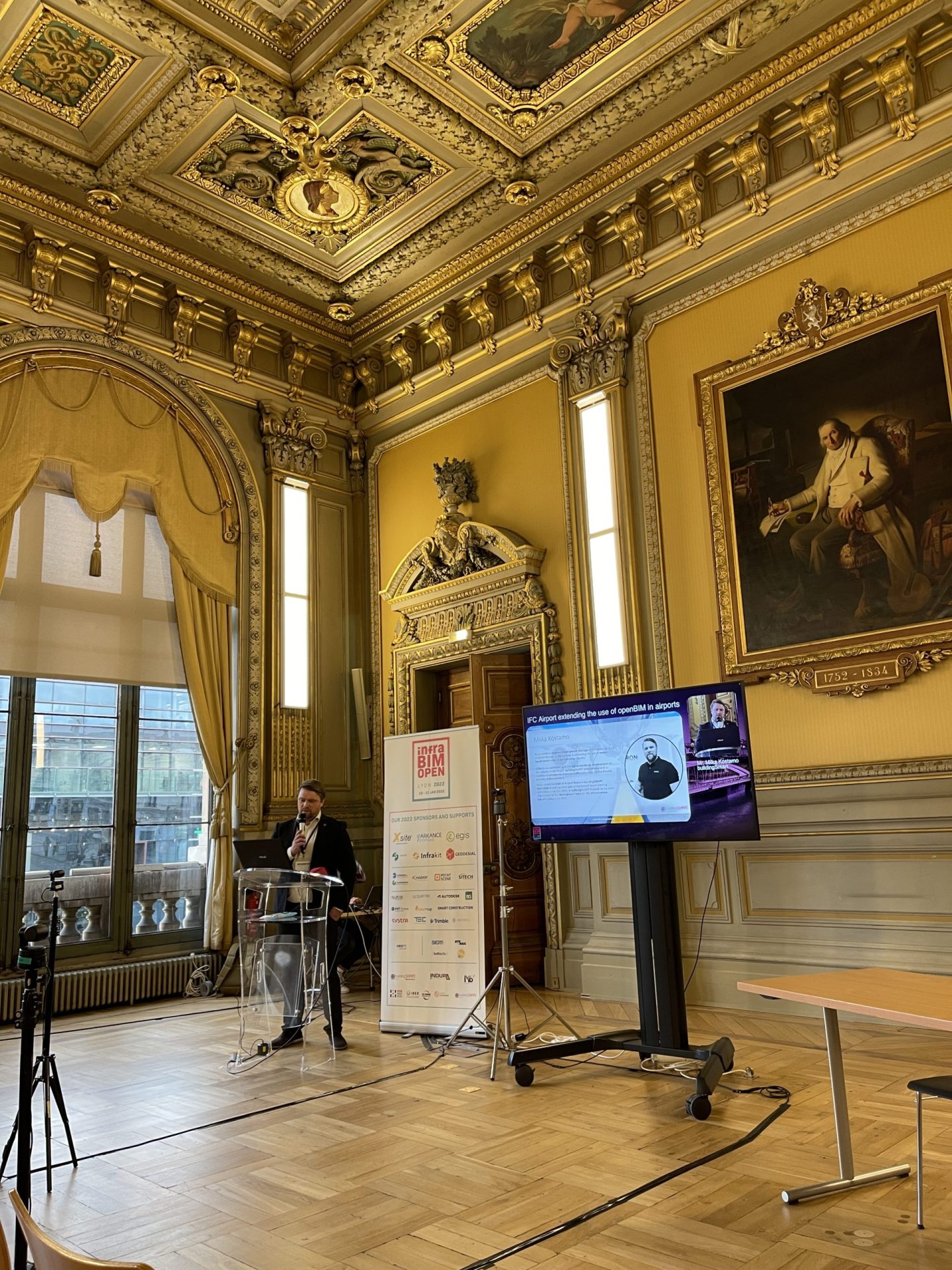 Miika Kostamo from Finland talking about the use of OpenBIM in airports. 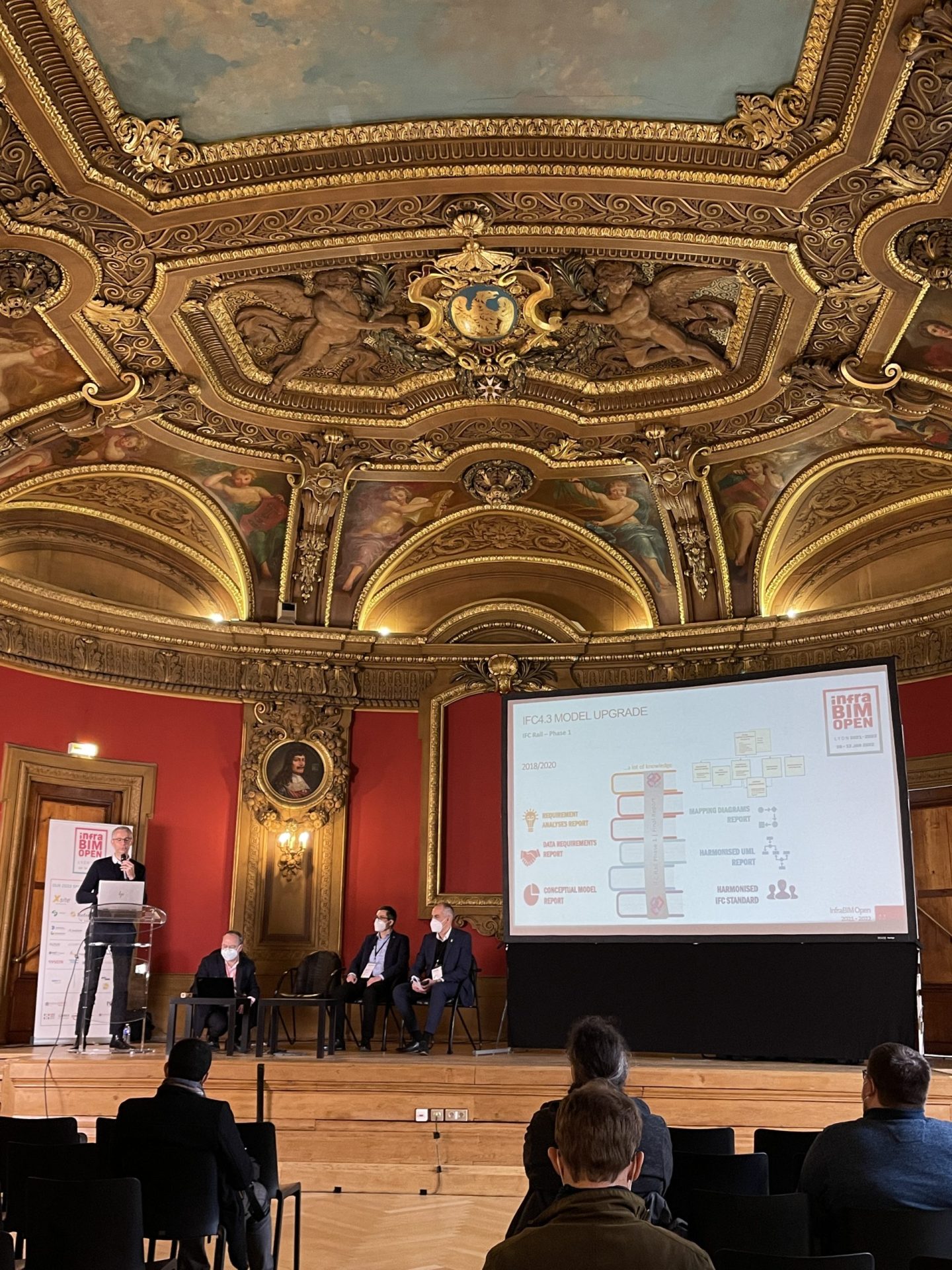 Panel discussion about IFC 4.3. The room is slightly fancier than for example Finland's Messukeskus! 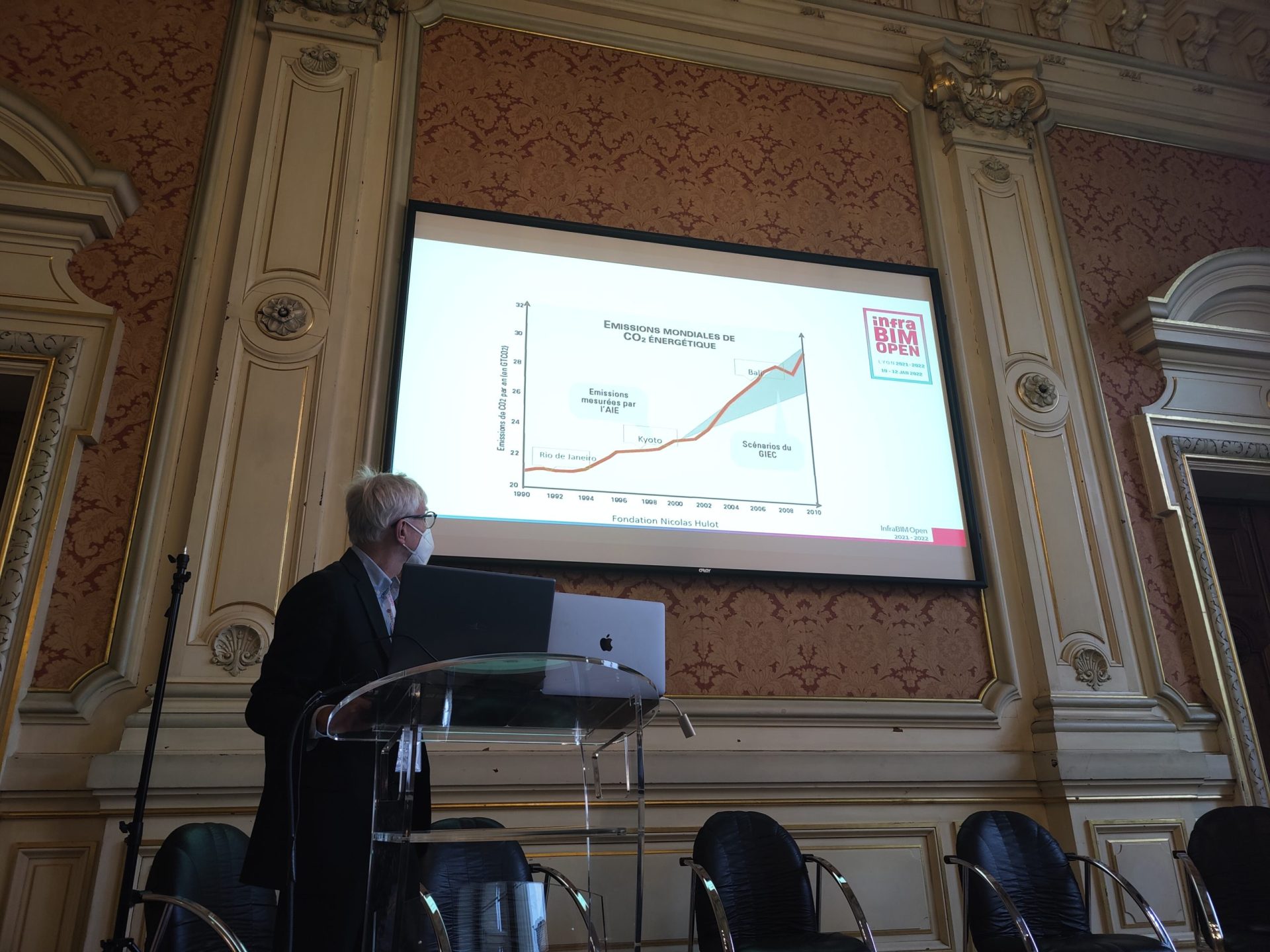 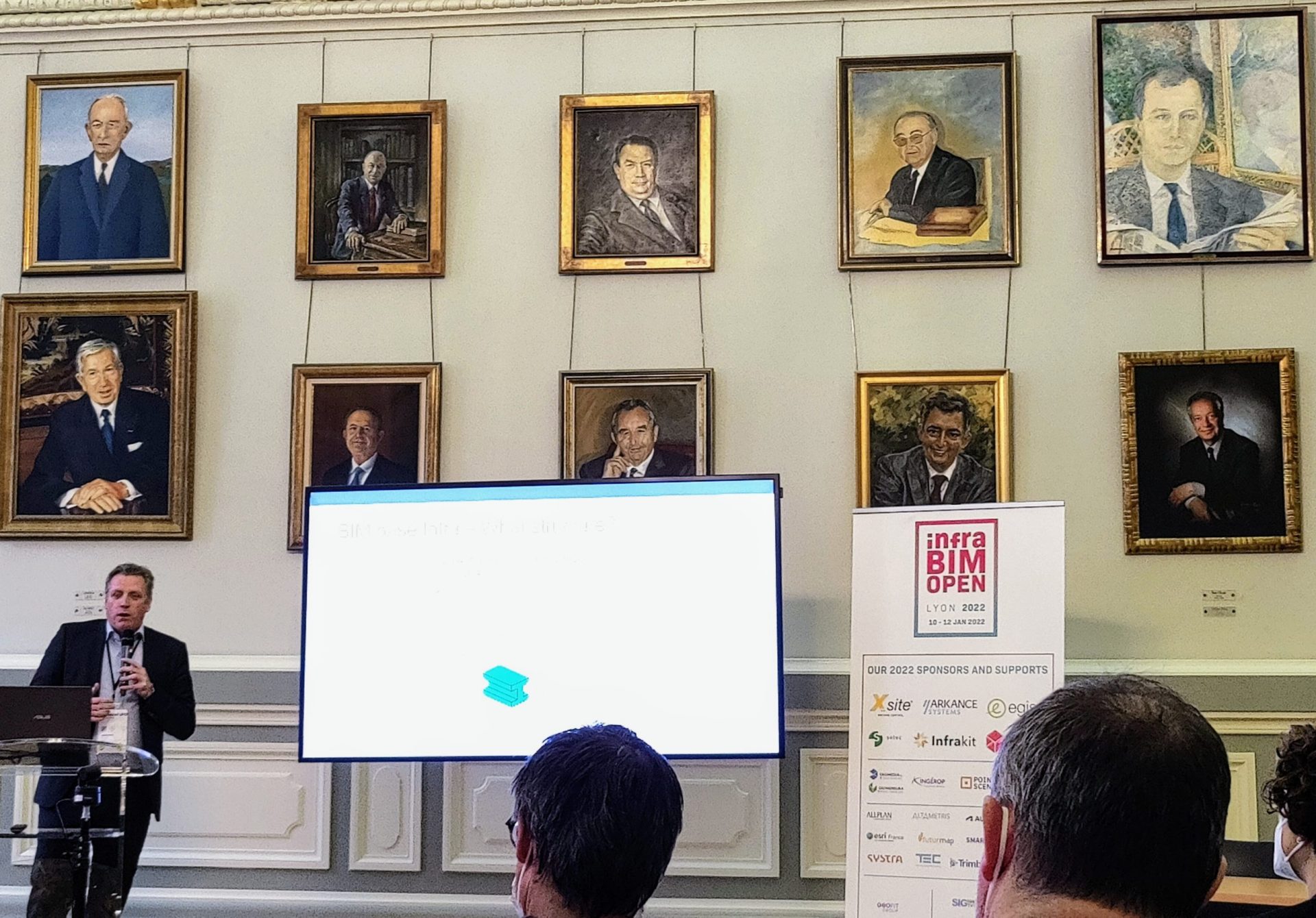 The presentations were very interesting and inspiring. Paulus Eckhardt (the Netherlands) is talking here about digital information exchange. 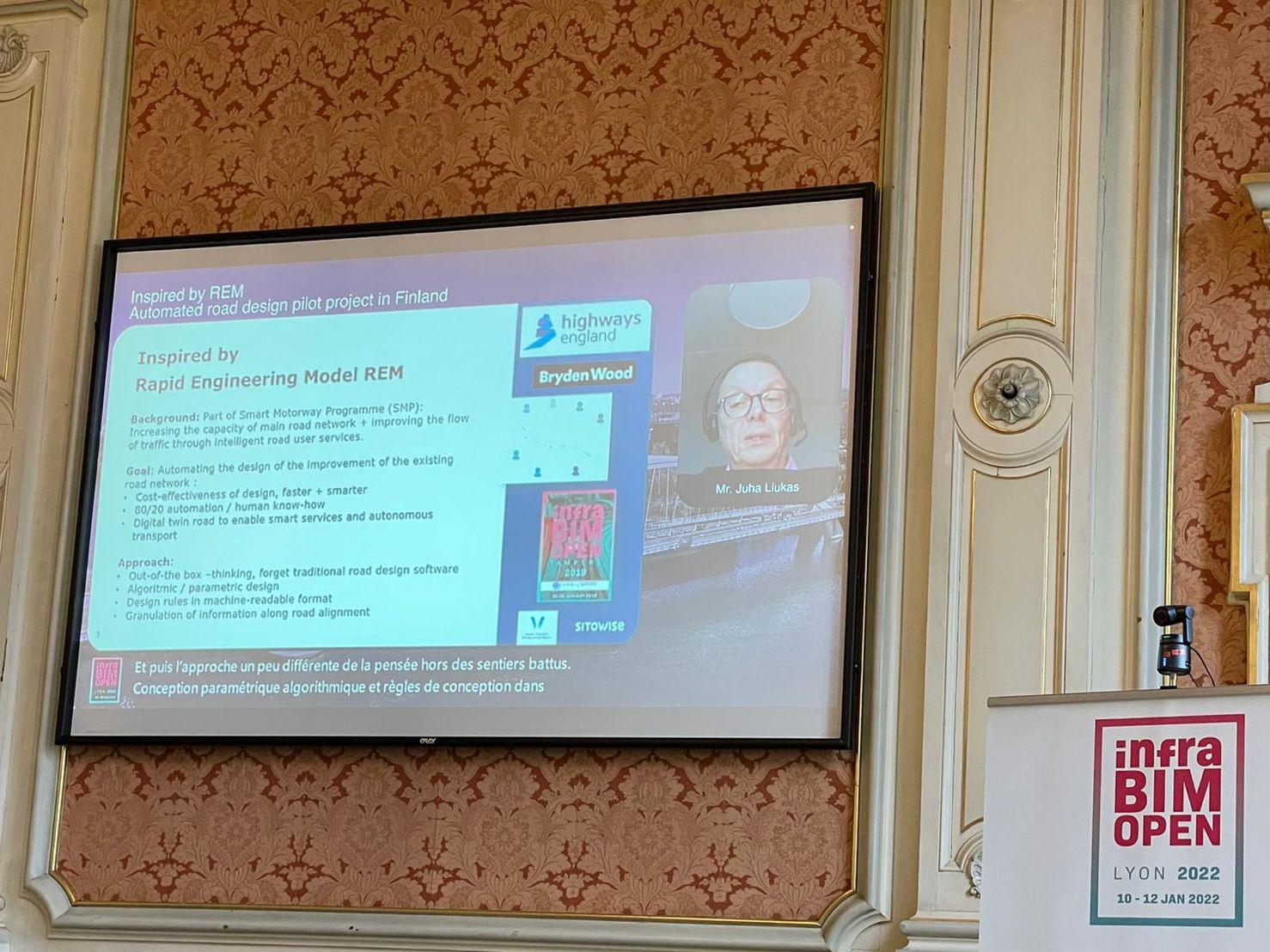 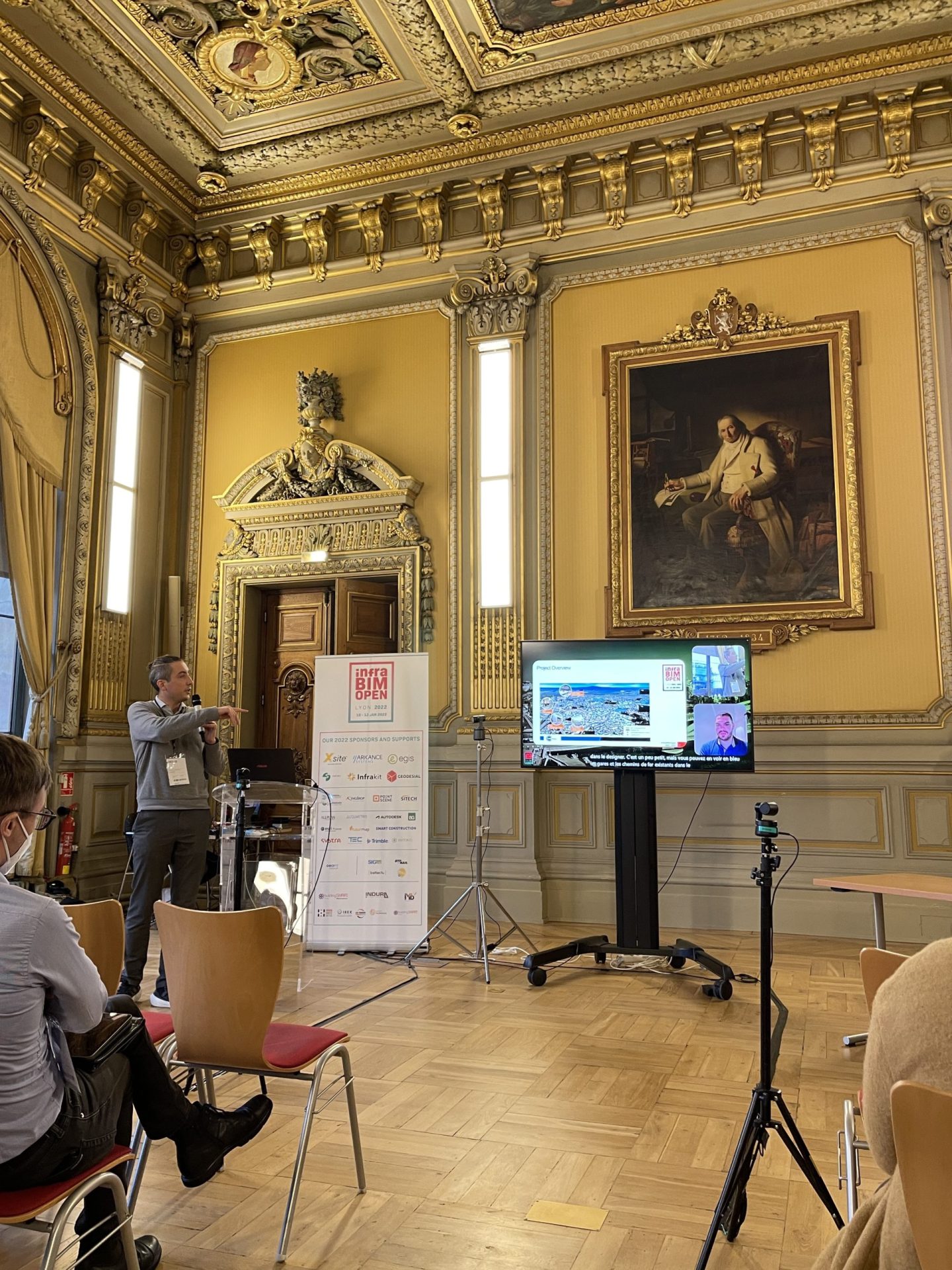 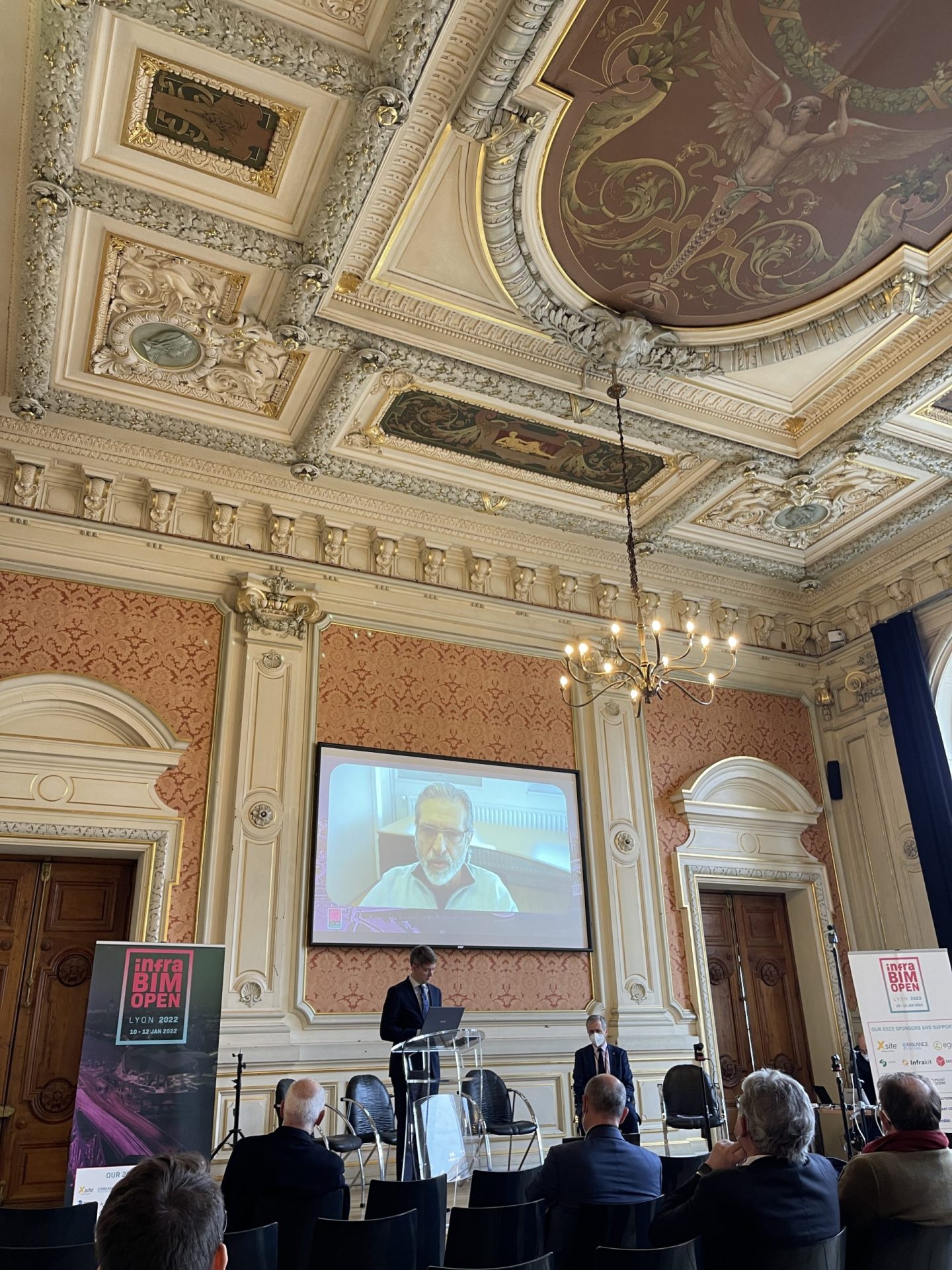 Jaan Saar (in front of the computer) and Souheil Soubra (on screen) were hosting the Closing Plenary on Wednesday. 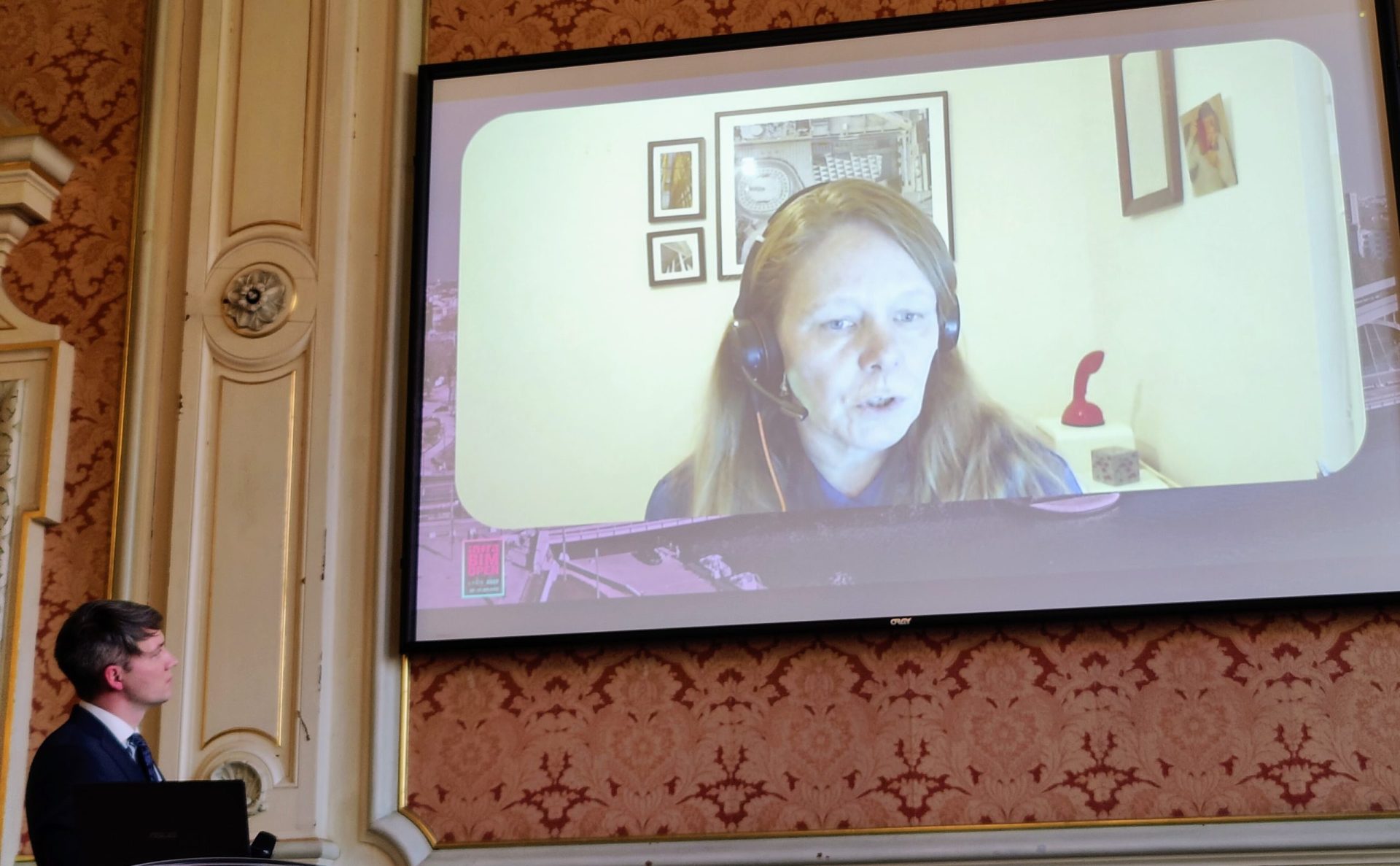 Karin Anderson (Sweden) in the screen and Jaan Saar in front. Karin was one of the speakers in the Closing Plenary.

infraBIM Open will happen in Tampere Finland in 2023 - see you there!